Hi everyone! I would like to welcome you to explore the world’s longest sea beach that is situated in a town where there is a fishing port on the Bay of Bengal in Bangladesh. This is the world’s longest natural white sandy beach Cox’s Bazaar which is an unbroken stretch of long beach of 125 kilometers (approximately 75 miles). This unique beach is located 150 kilometers south of the industrial port of Chittagong in the country.

Here is a breathing space gallery for you on Cox’s Bazaar, uploaded by Beautiful Places To See YouTube channel:

Cox’s Bazaar is named after Captain Hiram Cox, who was an officer of the British colonial rulers of the East India Company in British India. Hiram was sent by the British rulers to rehabilitate the Buddhist immigrant Rohingyas from the nearby Burma (now Myanmar) into this area in the late 1790s.

Today, this beach is one of the most visited tourist destinations in the country. Winter is the busiest month for this tourist spot. Tourists enjoy basking in the Sun and the spectacular sunsets here. One can enjoy the maximum temperature of 53.6 degrees Fahrenheit (i.e., 12 degrees Celsius) here while enjoying green coconut water on the seashore.

You may find people catching baby shrimps with their nets on this beach. You will find a chain of rolling hills that run parallel to the sea throughout almost the entire stretch. You might also want to explore the towering cliffs, waterfalls, ancient pagodas, and Hindu temples in this spot. Coral islands of Saint Martin, Inani beach, and tribal villages are the added attractions nearby.

Here is my photo with my friends at one of the seaside restaurants called Angel Drop (now defunct possibly due to conservation restrictions) back in late 2005 (possibly in November 2005): Six of us friends (Umana, Shelly, Sharful, Selina, Salahuddin, and Neela) with two kids (Maisha and Hisham, only one seen in this picture) had set out for the Cox’s Bazaar expedition back then. This was possibly quite late at night while we thought we all should have a little share of the sea breeze! Here is the excursion photos for University of Asia Pacific that I had clicked back in early 2006 (one of the pictures was inside the water trawler while going to the nearby island at Maheshkhali) with my students at my trip to Cox’s Bazaar, and the nearby island of Maheshkhali: I guess I was the only person who was all dry! Inside the water trawler with my students. After visiting the seashore, we all were famished with hunger. A sea-visit surely gives rise to a ravenous appetite!

Here’s another picture of the Inani Beach in Cox’s Bazaar: 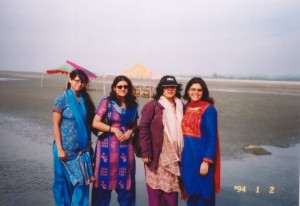 Last but not the least before I call it a day today, here’s a song for you that was shot in Cox’s Bazaar of Bangladesh. This is a song by a very talented young singer Xefer Rahman. The music video was shot by a Bangladeshi director. Thanks to the artist Xefer for uploading this original and refreshing song on her YouTube channel Xefer.  Enjoy!