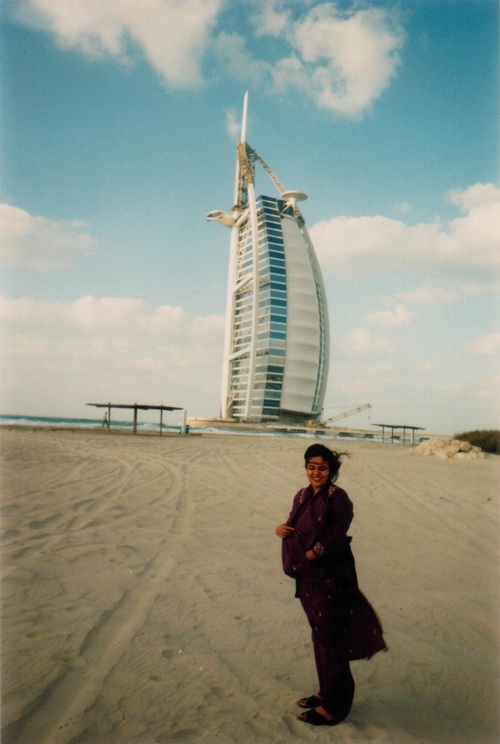 It was 1999 when I went to Dubai for the very first time. This picture of mine also has a special significance to me as I was standing in front of Burj-Al-Arab in Dubai, the world’s only 7-star hotel and also the world’s tallest! This photo was clicked in early 1999 by my one and only paternal Uncle. The hotel was about to open shortly. It was a terribly windy day and while being open to the wind speed, I could hardly keep myself stable by anchoring my feet on the ground!

Once my uncle had asked me to stand in front of this mega structure, I didn’t have any idea as to what it was! I couldn’t disobey him as he had always been my father-figure! I wished the photo session was soon over since the wind was so fierce, I feared it was going to throw me to the nearby sea — just the way many small children pelt stones by playing splash in a puddle, the fierce wind would do exactly that! Though I was a bit terrified, nonetheless I wore a plastic smile on my face lest my Uncle was hurt. Strangely enough, I never realized this pot-belly structure, which actually was representing a billowing sail behind me would be the world’s tallest (seven-star) hotel and an emblem of Dubai. I never understood the significance of posing for this picture until I got to recognize this mega-structure and realized about the uniqueness of this structure from the promotional programs and documentaries on the television!

Ever since 1999, I had been to Dubai at least four times up until now. I had to visit this place for many purposes like friends and family visits, international conference, holiday destination, and last but not the least, stopover on the way to the USA, yet the charm of this mega-structure in Dubai has not waned for me till now. 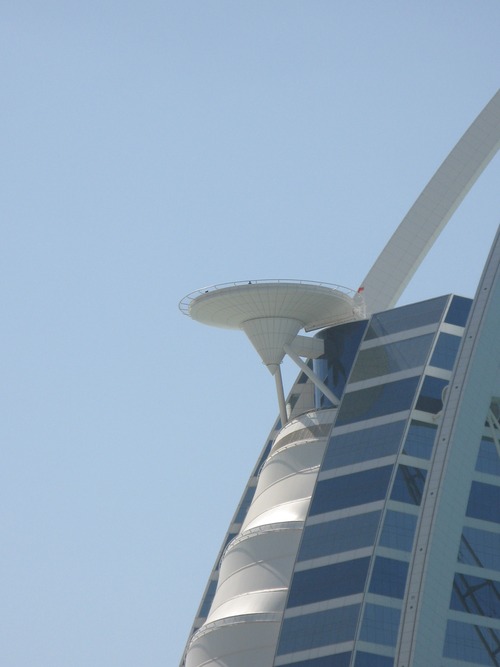 This is a photo of the helipad of the Burj-Al-Arab that I had clicked from a distance during 2010 from the open-top double-decker bus tour ride I had taken in Dubai.

The helipad is being commercially used for myriad purposes other than the regular take-off or landing of the helicopters there. The management of the hotel has been very innovative in optimizing its usage in various promotional purposes. They have come up with so many different out-of-the box ideas to make Burj-Al-Arab stand out and stand apart. It has been very successful in positioning itself as an epitome of luxury and opulence. Back in 2003, when I visited Dubai for the second time, Burj-Al-Arab used to be an emblem the Emirati people who used to carry the ‘Burj-Al-Arab’ insignia — the seven-star hotel logo etched in the nameplates of their personal sedans.

People have played golf on the helipad yet the tennis match at the helipad of Burj-al-Arab, is the most fascinating! A power-point presentation featuring the helipad of this iconic hotel was disseminated from Dubai, back in the year 2005 when André Agassi and Roger Fédérer played tennis on the hotel’s helipad at 211 meters high! A security mesh was spread around the tennis court on the helipad to prevent any possible falls. This presentation had become viral. Here are the snapshots collected from the online version of the April 2014 report by the Daily Mail (UK) and the July 20, 2011 report by Amusing Planet about this special event: 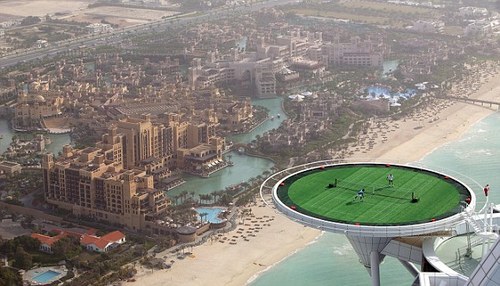 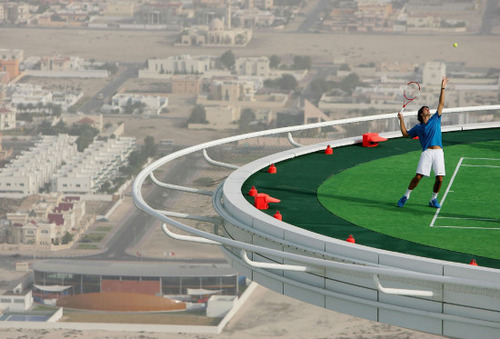 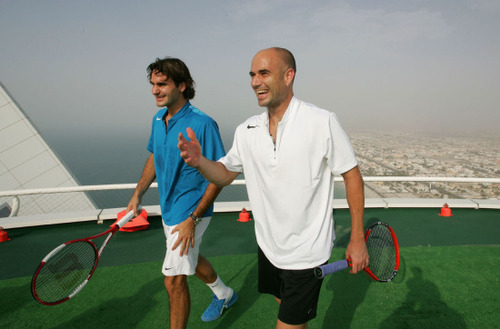 Here is the thrilling video posted by Dubai Film YouTube channel on the first-ever helipad skydive landing in Dubai.

This video was posted in December 1, 2013 by the Dubai Film YouTube channel. The channel on the video description writes: “H.E. Nasser Al Neyadi of SkydiveDubai becomes the first skydiver to land on Jumeirah‘s prestigious Burj-Al-Arab Helipad, part of the world’s only 7-Star Hotel just off the beaches of Dubai, United Arab Emirates.”

I hope you like this feature on the world’s tallest 7-star icon!

85 thoughts on “My Visit to the Seven-Star Hotel in the World!”